In the early 1990's my good friend and guide Jackson Street introduced me to an approach to trout fishing that would forever change the way I fished. We stepped out of the drift boat on the Colorado River on a fishy looking gentle, two to four foot deep riffle about fifty yards long. Jackson walked about 40 feet upstream of the boat and began casting. We were both fishing early prototype versions of the B/C Hopper. Quickly Jackson was tight to a fish. As he was landing the bright 16 inch rainbow, I noticed that the Hopper pattern was dangling above the waters surface.

I couldn't imagine how he could have hooked the fish if he didnt hook it on the Hopper, and I asked him what on earth was going on. He said he was fishing two flies - a hopper-Dropper - and that the fish was hooked on a nymph trailing off the bend of the Hopper. After watching him land that fish and having him explain how to rig up tandem flies, I immediately attached two feet of tippet. I cast the two flies upstream.

Spending time that day fishing with this highly effective method changed the way I fly fished and the way I designed flies. After three years of experimenting I came up with the Copper John which was introduced in the Umpqua catalog in 1996. It was designed with a bead, lead wire, and copper rib that makes for a fast sinking ultra realistic fly, the perfect dropper.

WHEN TO FISH THE HCD

When there are no rising trout, fishing a  Copper John behind a buoyant B/C Hopper is one of my favorite approaches Spring though Fall. The Copper John sinks rapidly and is an effective pattern on its own. You can also add a third fly to this rig, dropped off the bend of the Copper, that imitate the prevailing natural such as a Beatis or PMD nymph or Emerger. But to get use to the technique of casting and fishing multiple flies at one time, you may just want to start with two flies.

When fishing the HCD technique the set up is very important. I like to use a 9' fast action 4 wt but a 5 wt is also a good choice. I use a matching WF floating line that is heavy weighted towards the front of the taper which helps to quickly load the rod and makes casting and turning over the flies easier. I always use a 7 1/2 foot  Perform X Power Taper Leader tapered to 2x. 3x is ok but a 4x or lighter leader makes it difficult to cast and turn over the flies. I tie the hopper directly to the 2x. Depending on the depth of the water I use from 1-4 feet of 4x either Deceiver X or Phantom X fluorocarbon tied off the hook bend of the hopper to the Copper John and 8-12 inches of 5x fluorocarbon tied off the hook bend of the Copper John to the dropper. I use a 5 turn clinch knot for all of the connections. The dry fly can be any buoyant , hi vis pattern but I like a hopper in sizes 8-12. My two favorites are the BC and Paramore's Thunder Thighs. Both patterns are very buoyant and highly visible. Always make sure to pre-treat the flies with either the Shimazaki Liquid or the Dry Magic to keep the flies riding high. 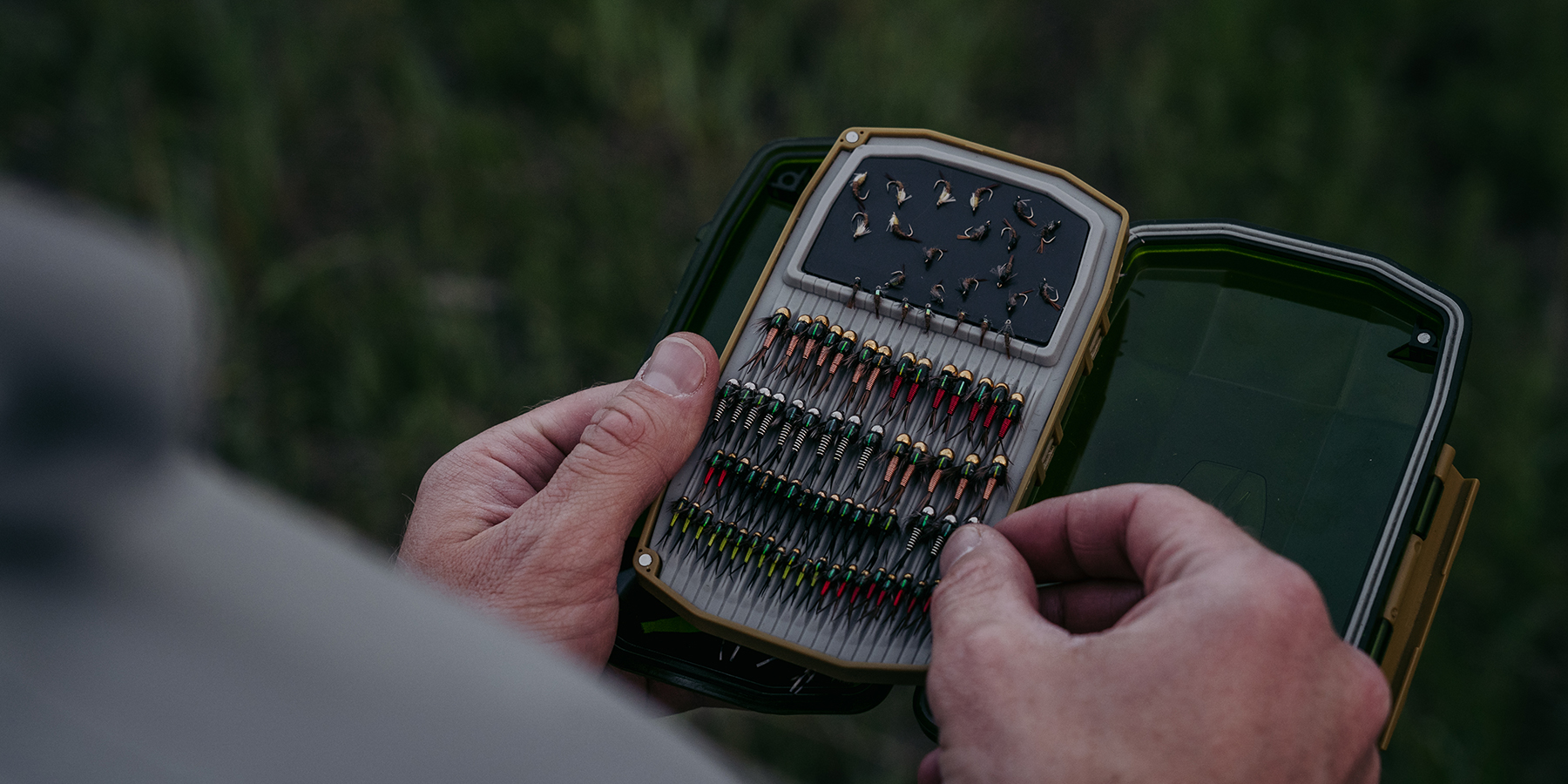 The first dropper is always a size 14 or 16 Copper John. A size 12 can sink the hopper and sizes 18 and smaller don't sink fast enough. The dropper off the Copper John can be any fly but usually I like to use a pattern representing the nymph or emergent stage of the prevailing insect activity at the time or any pattern representing the predominant forage in a particular fishery is a good choice.

If your line, leader and tippet set up is proper, casting the HCD is not much different than casting a single hopper pattern. The backcast should be a smooth acceleration with a slight pause to allow the hopper and the nymphs to straighten before smoothly executing the forward cast. The loop will be a bit wider and the tempo a little slower than if you are casting a single dry fly but not that much different.

Detecting when a trout takes the hopper is obvious and when a fish takes one of the nymphs the hopper will pause, twitch or get pulled under at which point you set the hook. The HCD technique can be fished with a dead drift but I like to add some twitches during the drift. Nymphs and worms squirm and wiggle when drifting downriver and hoppers certainly move as they kick their hind legs while trying to escape the water. 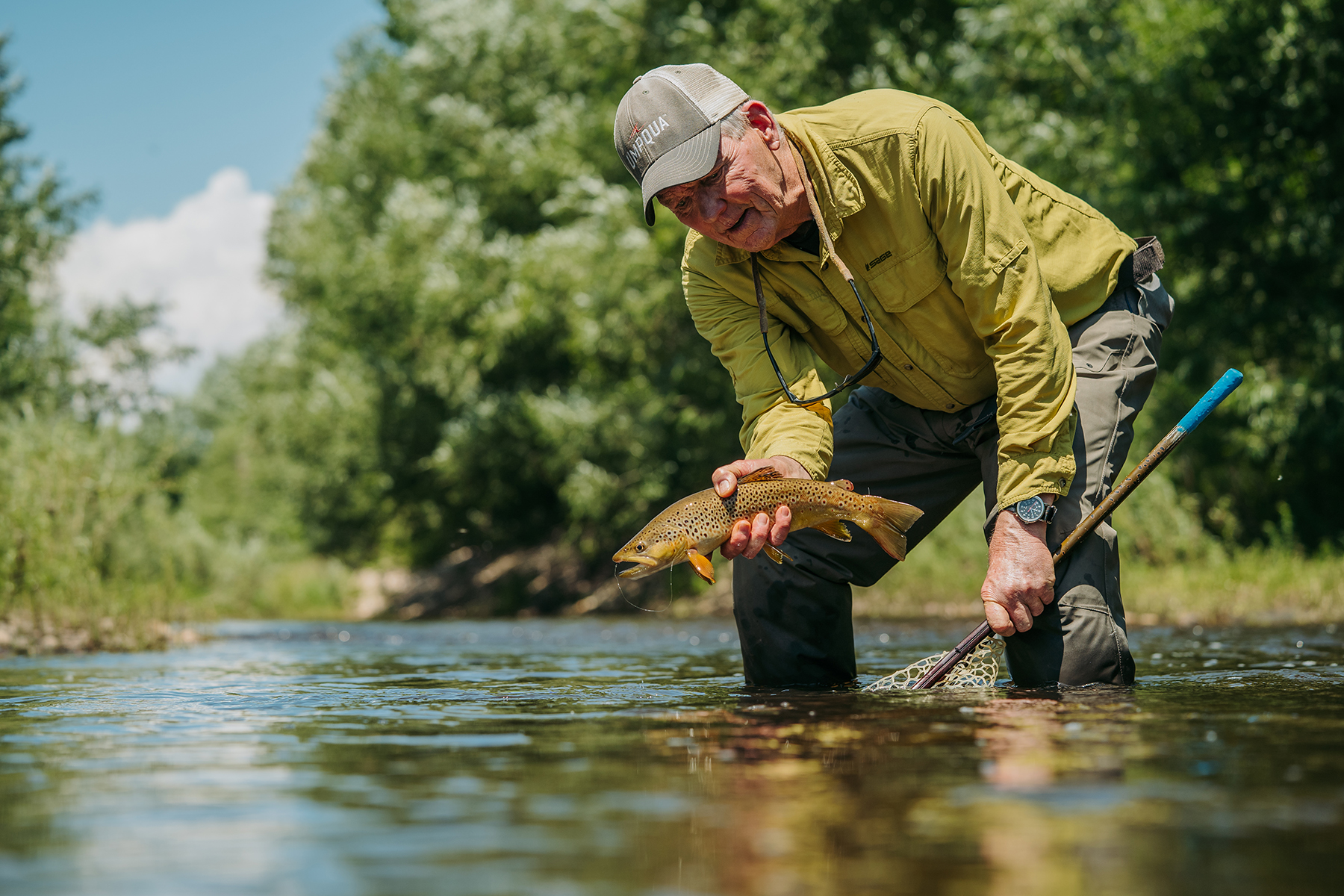