The mile-walk to the river took us through brilliant meadows. Wild irises, Indian Paintbrush, monkeyflower, Potentilla, and larkspur lite-up the otherwise empty landscape, and the kids stopped several times to examine the riot of colors. We hiked along the old stagecoach route that ran from Salt Lake City, Utah to Yellowstone National Park, the wagon-wheel ruts still visible even after a hundred years.

I turned to urge the group onward and fell into a badger hole. Skyla and Weston roared, their dad Dylan expressed concern for any injuries I might have sustained, while my wife Jackie demanded, “watch where you are going”, no sympathy there.

I promised 14-year old Skyla and her 11-year old brother Weston, we would have chances to catch some lovely native and wild trout and grayling that day. Dylan, Jackie and I would stand guard for protective cow moose and their calves along with the grizzlies that inhabit the wetlands we would fish through.

The final 200-yards to the river took us through a maze of cattails and willows. Arriving at the stream the kids were anxious to get fishing. We sat on the bank tying on fresh tippet and searching the water, hoping to find fish rising to early morning midges, emerging caddis, or Pale Morning Dun mayfly spinners we saw hovering over the water.

Skyla spotted the first rise, coming up in slack water against the far upstream bank. The big fish rose aggressively, we guessed for emerging caddis since there were a few fluttering at the head of the pool. Skyla insisted Weston have the first go. We sat waiting for the fish to rise once more but it never came up again. We decided to try a Serendipity, a good imitation of a drifting caddis pupae.

Weston’s first cast landed perfectly in the far-side current tongue. The fly would drift through the area we’d seen the fish rise. We held our breaths as the fly line entered the sweet spot. The line paused, Weston raised the rod tip and was fast into his first grayling, a plump 14-inch male. 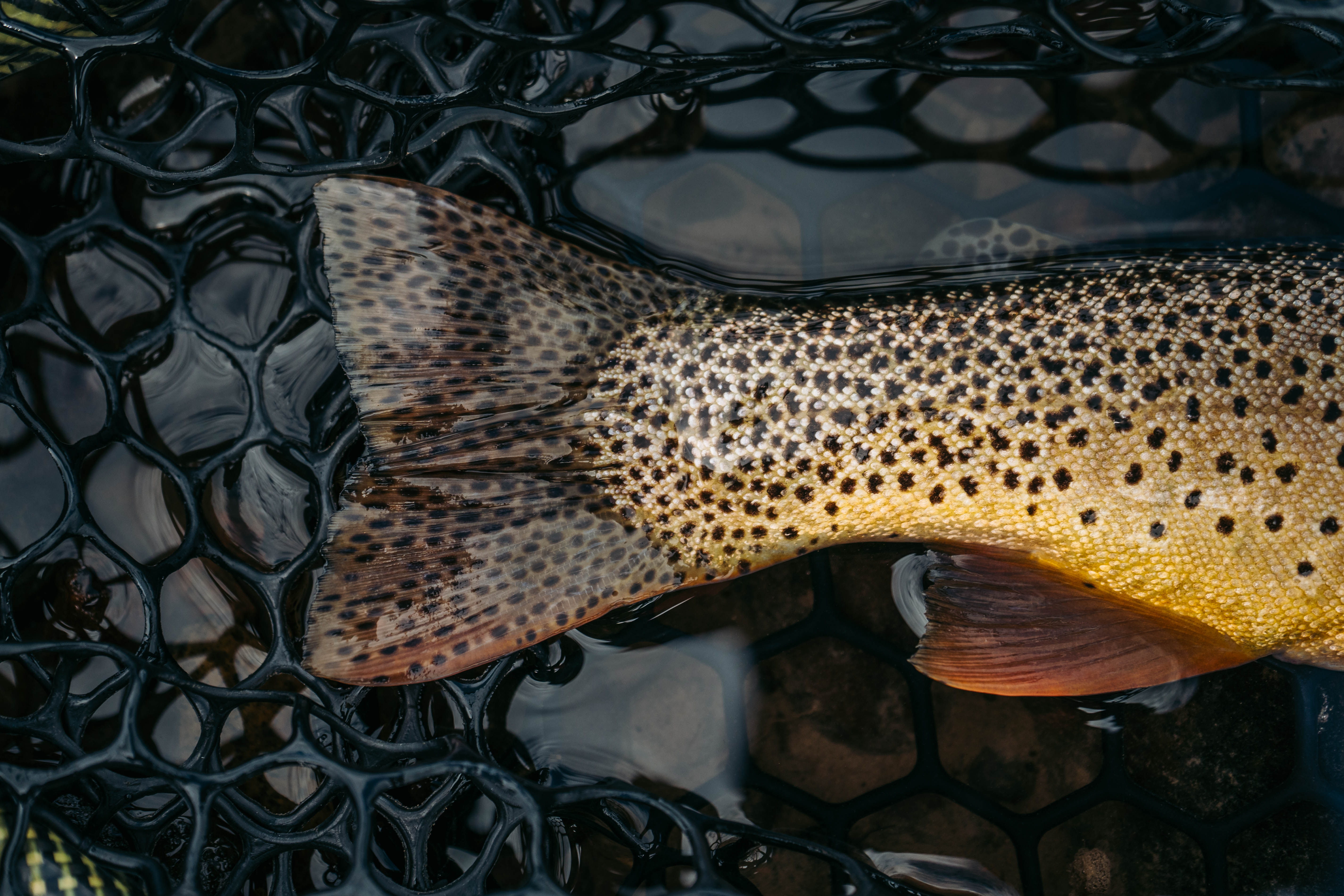 Skyla’s turn came at the next pool. We snuck up to the heart of it, where the fish would be holding in the greenish depths where overhanging willow branches were trapped-swaying in the currents. The five of us on our hands and knees slowly shuffling closer until we could finally peer over the shoreline grasses and search for our game. There they were, a couple big Yellowstone cutthroat trout and a few smallish grayling, side-by-side, holding-finning, nose into the current, not ten feet away. We sat unbreathing, I know my heart was beating, thumping in my chest. I asked, “do they excite you?”. Skyla said, “maybe we shouldn’t bother them”. I looked back at her and she smiled big, “ya sure”, I replied as she slipped tippet through the eye of the fly she’d chosen, a pink San Juan worm. I asked her, “why-oh-why did you chose a worm?” “Simple, check out all the worms swirling in the current”, pointing her rod at a wad of no less than twenty natural worms that had washed into the stream last night after a heavy downpour.

Sklya’s first presentation split the cutthroats drifting by them without a look, her second cast drifted on the far side of the fish and brought the same result, although one of the small grayling came to life following the fly downstream a few feet. This movement woke up the cutthroat that moved upstream a few feet. I’m sure the fish had been sleeping, but were now awake, moving slowly upstream then drifting back down to their previous spot. Skyla held up on her next cast allowing time to let the fish settle and watch their movements in case she’d need to adjust her next presentation. Her next cast landed on the largest fish’s nose. The fish spun around, mouth open, and the fly disappeared into its maw. Skyla stood up raising the rod and was fast into the huge fish. The cutthroat ran upstream into the next pool then headed back to where she’d first hook it. With its hooked jaw we knew it was a big male. The fish twisting and turning, keeping deep, bulldogging trying to wrap up in the snags on the bottom of the stream. Twice Skyla brought it near the bank and both times it saw us approach and bolted away. Then, the barbless hook came loose and the fish sank to the bottom, sulking with us watching a few feet away. Skyla announced, “that’s okay, we fooled him got a good fight, plus we were not going to eat him anyway.” 11-yearold Weston shot back, “I hope we can find one of big dudes for me!” 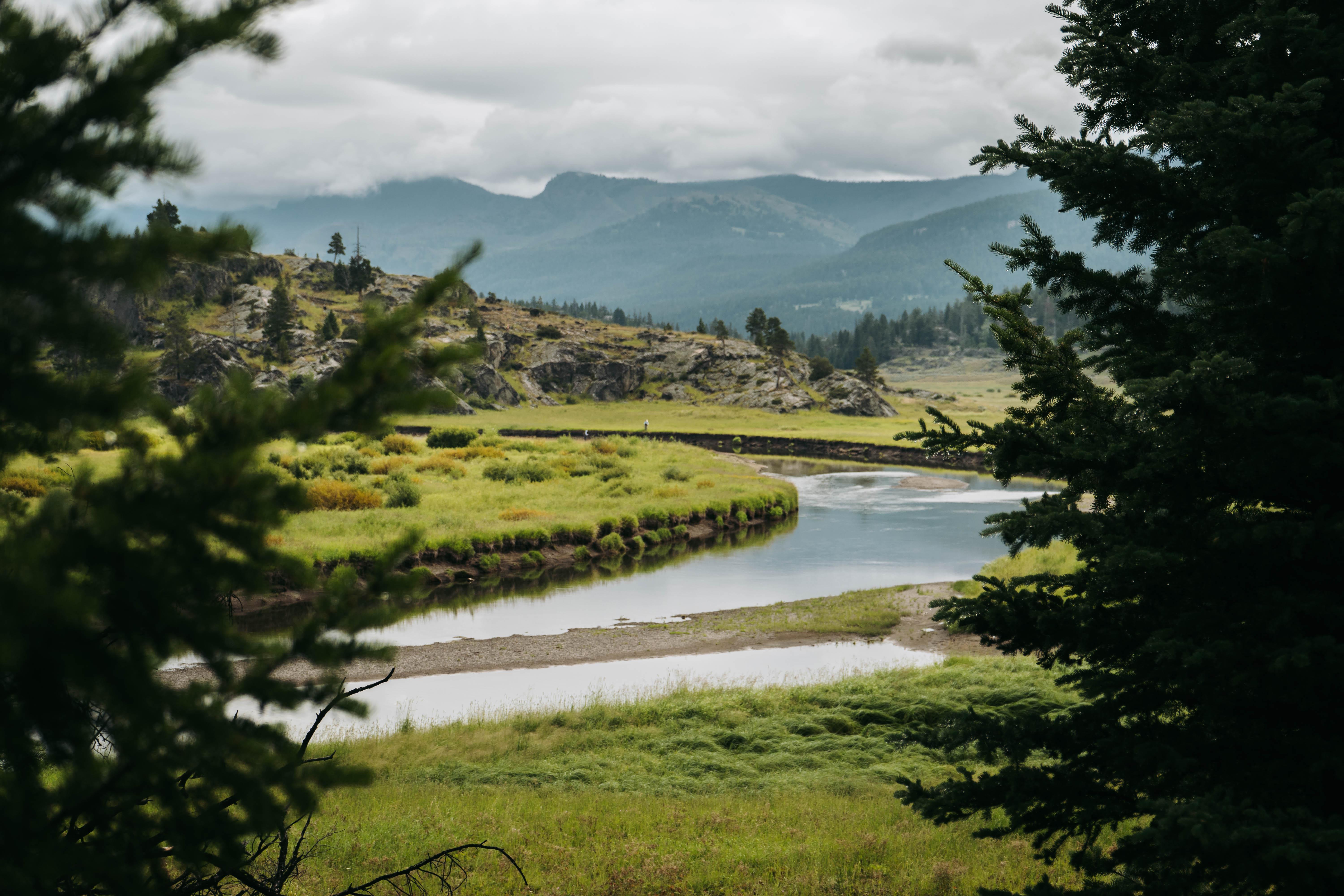 We fished upstream through a couple pools with no luck. At the bottom of the next large pool Weston and I stood patiently watching when a huge fish drifted downstream towards us. The cutthroat was now a rod’s length away, facing upstream. Weston pulled a few feet of line from his reel and sent a cast 6-feet above the fish. It raced the fly and grabbed it while Weston stripped in slack and set the hook. After a short battle with all family members to help he landed the fine Yellowstone cutthroat, 2-feet long.

We headed home for elk burgers. After dinner the kids wanted to fish the evening rise on the Madison River. Skyla and I fished at a favorite pool near the bridge while Weston and his dad hiked downstream. At 8p.m. small trout began rising to emerging caddis, some leaping out of the water chasing the emergers. Skyla and I watched, and waited, not casting to the little fish, knowing big trout would soon begin to feed as the light faded and the large fish chased the smaller risers out of their favorite feeding lanes. Soon, there were no rising fish, a sure sign the big fish had moved in to begin feeding. A few minutes later the first big fish rose, a classic head-and-tail rise to the drifting caddis pupae. Skyla had knotted an Iris Caddis to her 5x tippet. Still, she did not cast, instead waiting and watching a few more minutes as more and more big trout joined in the caddis feast. Now there were 6-8 good fish working, rolling-porpoising and casually taking emerging caddis all within 15-feet of us. It took 3 casts for Skyla to hook her first fish, a good rainbow that jumped 4 times before coming to hand. She took a few more that jumped, ran and made the reel scream. By now several nearby anglers had noticed and inched their within casting range of us. We’d seen them flailing the water with no hook-ups. We heard one say to his partner, “that’s a girl, she’s catching trout right and left”, “wonder what fly she is using”. Skyla said loud enough for the fishermen to hear, “these Iris Caddis sure work good”. She looked back at me and smiled and just then a good fish grabbed her fly and ran upstream breaking her off. The big brown jumped twice in front of us trying to dislodge the barbless hooked Iris.

Skyla decided to try an X Caddis, saying she could see fish taking adult caddis off the surface and the X Caddis is the best impaired adult caddis imitation, a caddis stuck in its shuck, not able to escape the surface film. She took a couple nice rainbows while the downstream anglers snuck even closer, to within 3 rod lengths of us, watching Skyla hold a clinic on evening caddis fishing. Then suddenly the fish changed their riseforms. No longer rolling and porpoising to emerging caddis now they barely sipped insects off the surface. I expected to find the fish were taking mayfly spinners, but opted to take out my little insect seine to make sure, and save what little time we had to fish in the failing evening light. 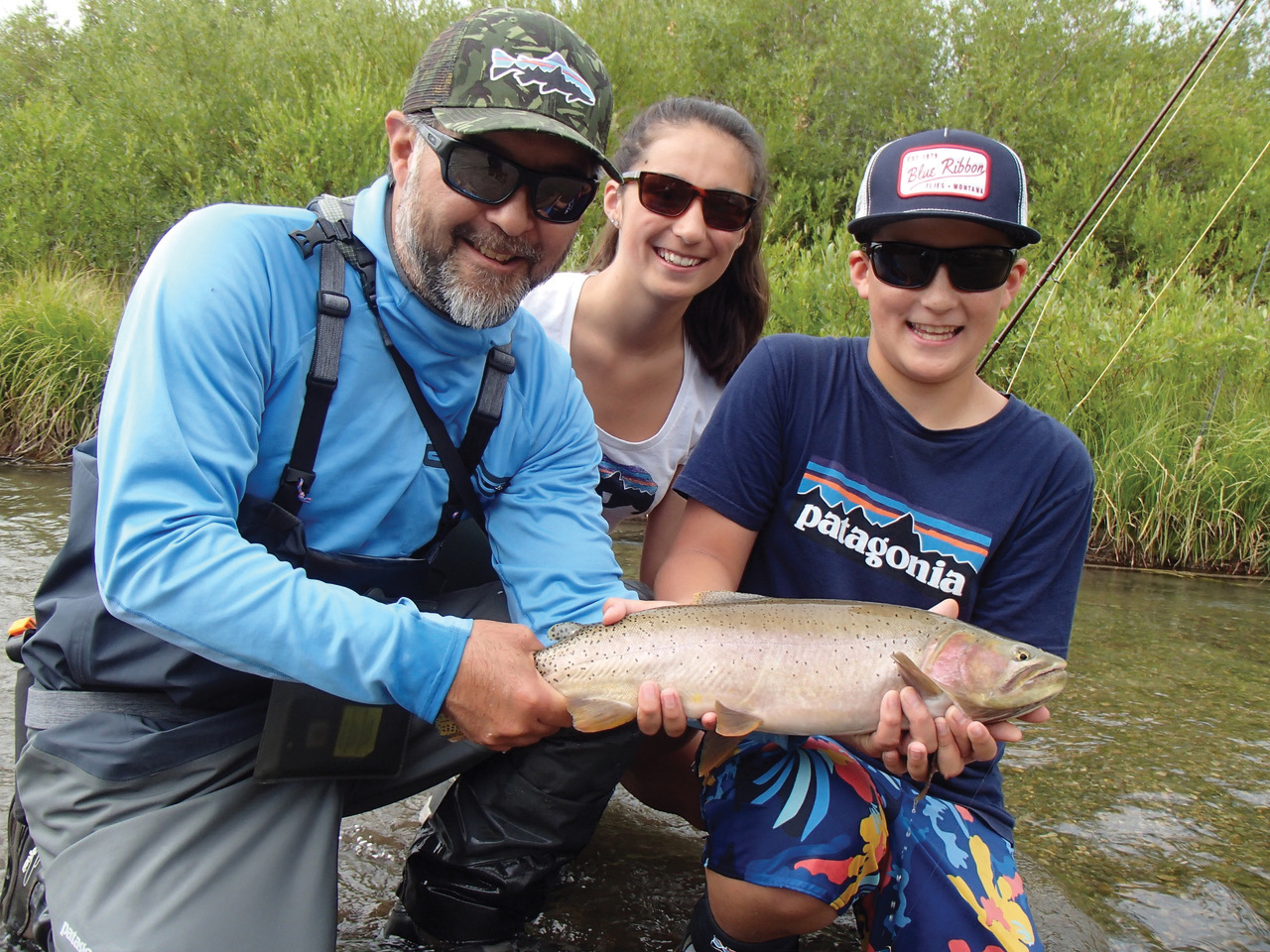 The tiny net revealed emerging midges, many impaired-trapped in their pupal shucks, trout key on these knowing they cannot fly off wasting energy chasing those that do.

I gave Skyla a #20 Scotty’s Midge, one we tie with a trailing root-beer-bottle colored shuck that imitates the summer midges found on western waters. Skyla held another clinic for those anglers, now numbering 7 men, that stood at the lower end of the short pool we fished. She took a couple fat 15-inch brown trout that jumped and ran to the feet of the men. The last trout was netted by one of the men, they were not only that close but wanted to “see what fly that little lady was using”.

We stopped fishing and had a nice conversation with the group gathered around. It turned out they’d rented a home nearby, and it was their first evening on the river. Out came our fly boxes, we gave each Iris and X Caddis along with Scotty’s Midges. Toothpaste grins all around from the guys and promises they’d listen to the river and do what it told them to do during their week on the river.

Skyla and I walked off the river that summer night with our own big smiles and satisfaction knowing we listened to the river and did what it told us to do, and took several big-wild trout that night by doing so.

I hope to see you on the river soon!