Umpqua has built an empire in our industry, and it started with an A Frame Cabin on the banks of the North Umpqua River. Based on all accounts, it should not have happened. It was such an improbable story you could have never come up with most of it. Doing things that no one had ever done before, and yet, it happened.

In the process, Umpqua changed the way the fly fishing industry was able to scale and grow through the production and delivery of fly tackle and the highest quality flies, designed by Royalty Tyers. Umpqua is built on a legacy of innovation and has encouraged innovation at pivotal moments.

This is the Umpqua Story told by some of the people who were witness to the events.

While life on the east coast in the early 60’s was marked with political turmoil around the JFK assignation and MLK delivering his powerful I Have a Dream speech, life in Fresno, California was simpler. Anglers were getting together, sharing ideas, and chasing trout. Dennis Black, Umpqua’s founder, was gifted a fly rod and then a fly tying kit by his family shortly after moving to Clovis, CA from Compton. This changed his life and the lives of many others that he would come in contact with throughout his life. 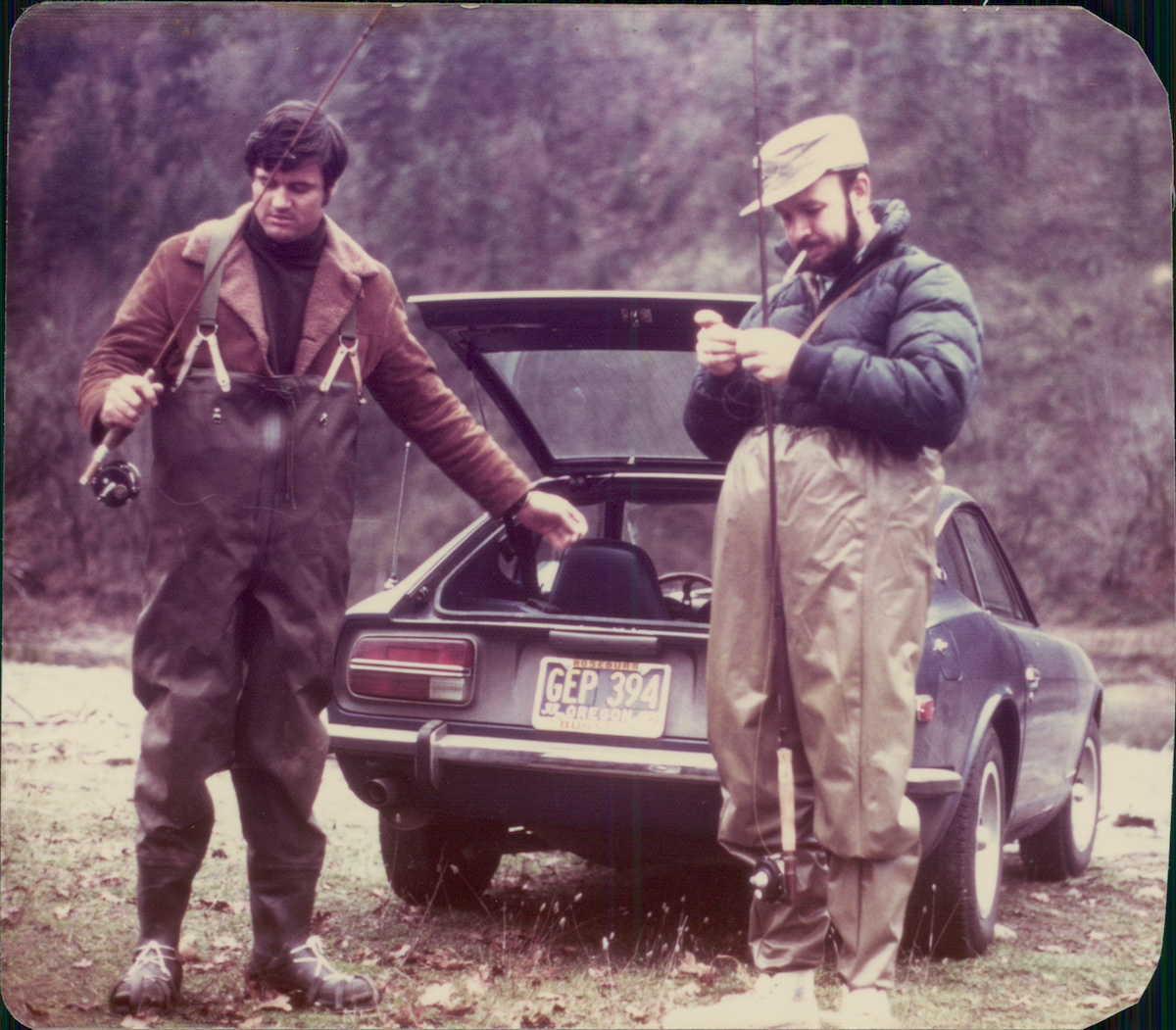 Dennis connected with The Flyfishers for Conservation club in Fresno and the Buz Buszek bunch. This was an eclectic and influential group of tyer-anglers that were advancing tying and angling techniques on a monthly basis. They had weekly outings to nearby Sierra waters and to Oregon. Dennis became part this core inner circle, which included Dave Inks and Ed Schroeder, and formed key relationships and learned to tie and fish from the likes of Buz Buszek, Darwin Atkins, Ira Lingren and Doug Prince. He became a fanatic and was soon tying commercially.

“Since the moment I met Dennis, my destiny was tied to him. Back in 1964 I went to a Fresno Fly Club meeting and bumped into Dennis. We got a bite to eat together afterwards – and from that point on we were fishing together once a week if not more!”, an excerpt taken from an interview with Ed Schroeder, Umpqua Signature Tyer and early sales rep. 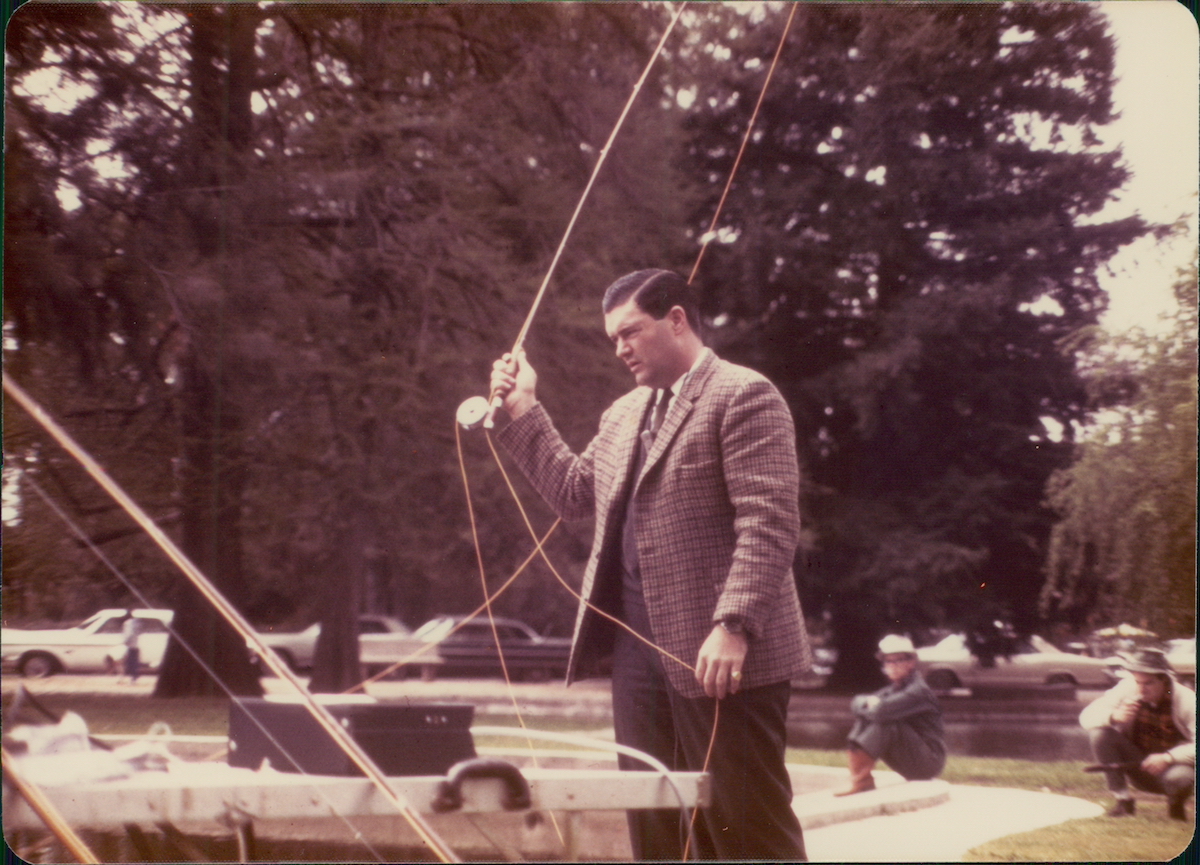 Dennis met Randall Kaufmann and Jack Dennis at Jackson Hole in 1966 when they were tying flies in the Rod and Reel shop and Dennis was attending the second annual Federation of Fly Fishers (FFF) conclave. This was a fortuitous meeting and the three became lifelong friends, collaborators and business associates.

During a 1968 club outing to Davis Lake, Oregon, Dave Inks took Dennis to the Umpqua to meet Frank Moore, legendary steelhead angler and proprietor of Steamboat Inn. They hung out together and according to Dave, “By the next weekend Dennis was moving to Winchester along the banks of the North Umpqua, where he started Black’s Custom Flies in a carport addition.” 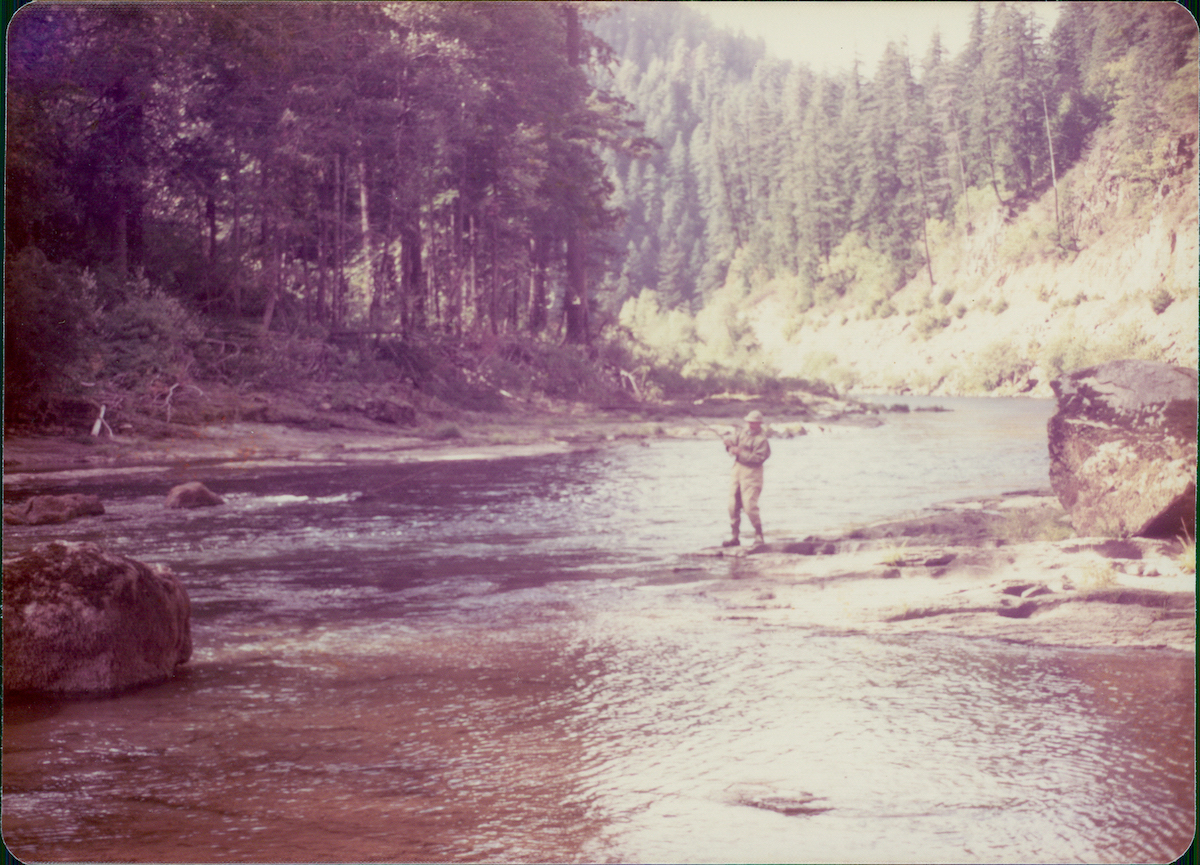 Ted, "The Englishman" tight to a steelhead in the ledges pool on the North Umpqua River in 1969's Oregon 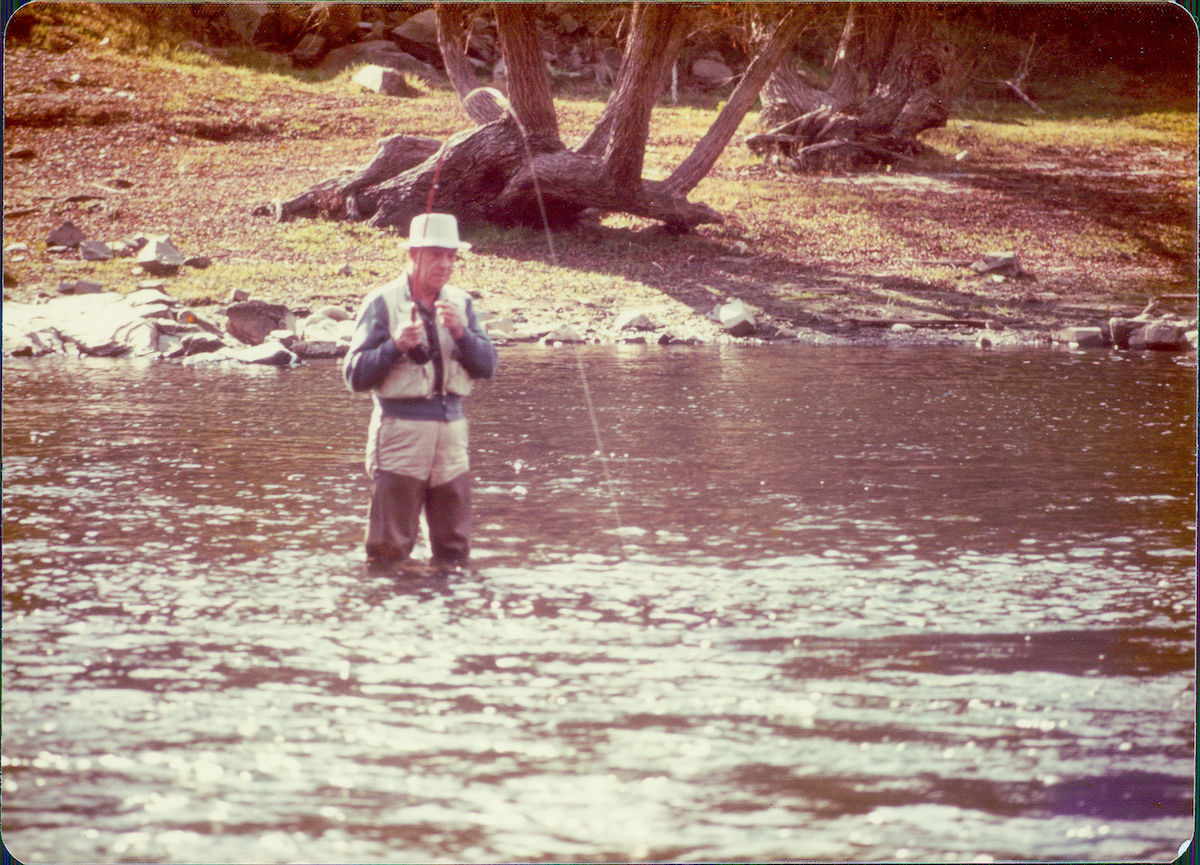 Doug Prince, creator of the Prince Nymph on the Kings River in 1963

The business name, Umpqua Feather Merchants, began in 1969 when Dave Inks purchased 10,000 Chinese necks from a feather merchant in Fresno, shipped them to Dennis in Oregon and for a while they were in the wholesale feather business.

Randall Kaufmann had joined Dennis in Roseburg at the tying bench in 1969 and both were tying 12-15+ dozen flies each day by 1pm, filling orders for 500 dozen flies a month.

Ed Schroder remembers visiting his friends on the Umpqua river, “These guys (Dennis and Randall) were robot tyers. They raced each other. No one tied better flies, faster. They started at 5:30am, cranked out 12 dozen by noon, then they might go steelhead fishing, but always return to the shop to fill material and custom fly orders. And they did that 7 days a week!” 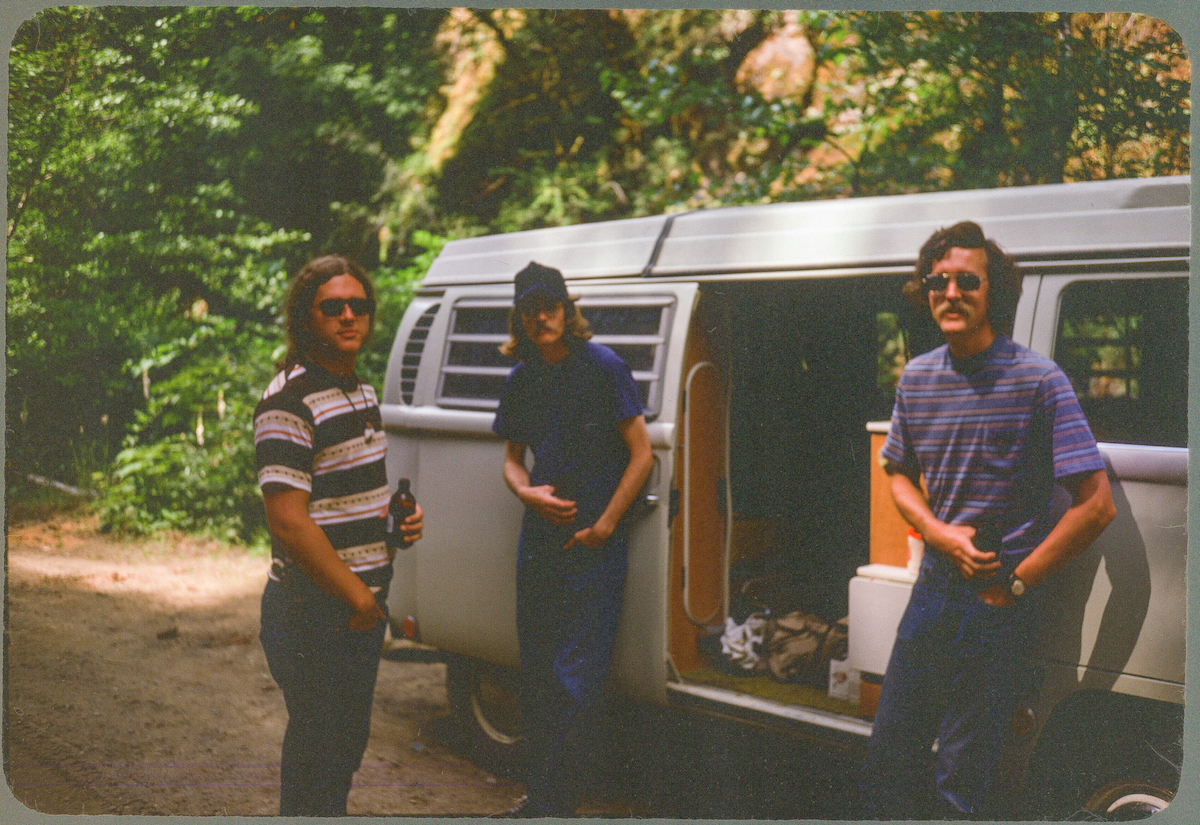 Commercial tyers get into a meditative or hypnotic zone and every movement becomes automatic. Randall remembers early conversations when they were in the zone, “Dennis and I had lots of time to think and talk about any and everything. A recurring topic was how could we get more tyers and production? We would tie a fly for every song and commercial on the radio, and I mused that tyers should receive a royalty for their fly designs just like song writers and recording artists.” This was the first hint at the royalty program and motivated by the fact that they were tying almost exclusively for Orvis and not coming close to meeting the demand.

Dave Inks subsequently started a fly importing business and Dennis went to Africa to work with the factory, and to India and Europe. Jack Dennis remembers a long-distance call with Randall saying, “Dennis is looking for this mythical fly tying factory, it’s all he can talk about, a search, like Lord of the Rings.” Luck favors the bold and while in Madras, India, Dennis met A. Joga Rao who had a fledgling tying operation. Dennis invited Joga to spend several months in Oregon to tie flies with him, Randall, and others. Joga returned to Madras and eventually began producing quality flies.

“Jack Dennis and I knew that no one had succeeded at this before. Logistics and difficulties were monumental. Training tyers, procuring and shipping materials for every pattern is daunting. Ironing out every wrap of thread one pattern at a time and ensuring consistent quality is an hour-by-hour task. Operating in a foreign country and culture is a challenge, requiring patience and finesse. Import, export, licenses, customs regulations and duty are always in flux. Sales, financial obligations and stress are on-going, and paying for reject flies is demoralizing,” Randall recalls.

Black’s Custom Flies suffered a major fire in late 1972. Dennis temporarily moved into an A-frame cabin at Susan Creek along the North Umpqua River and began traveling extensively the next few years, spending time at Joga’s fly factory in Madras and collecting necks in Bombay and Calcutta. He also had exclusive distribution of Hoffman hackle and soon became the major hackle supplier to the industry, and flies were beginning to arrive. Umpqua Feather Merchants, as we now know it, came to be. 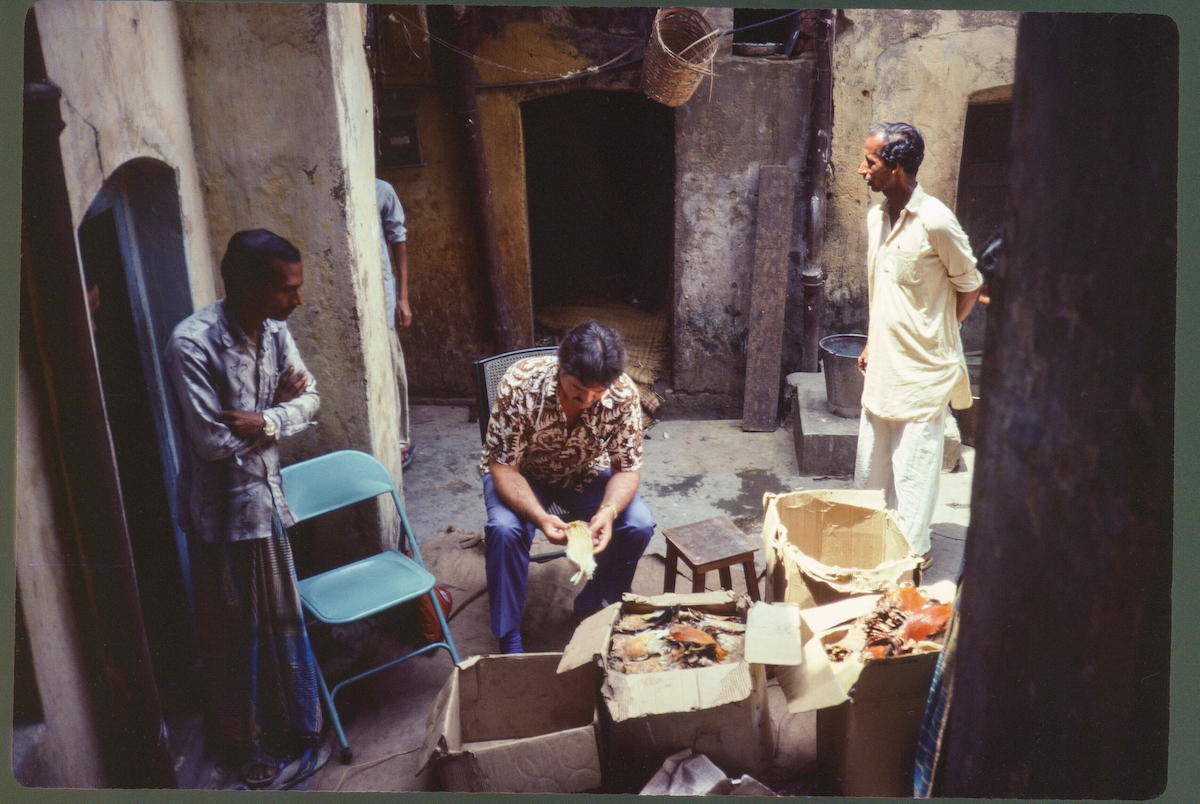 Dennis high grading hackle in a back alley in India

At the time Dennis had a VW van, hair down the middle of his back, and a plan. As Jack Dennis stated, “I remember going to Dennis’ place on Moore Lane in the mid 70s and the basement was filled with flies. So, I asked, what are you gonna do with all of these flies?” His plan was to take his fly inventory, load it in his red hippy van, and drive to every fly shop in the West in August when they desperately needed flies. The price of gas in 1968 was .38 cents and flies were being sold at shops for a 75 cents to $1. That summer he sold every fly at the first stop in Idaho and understood the opportunity. 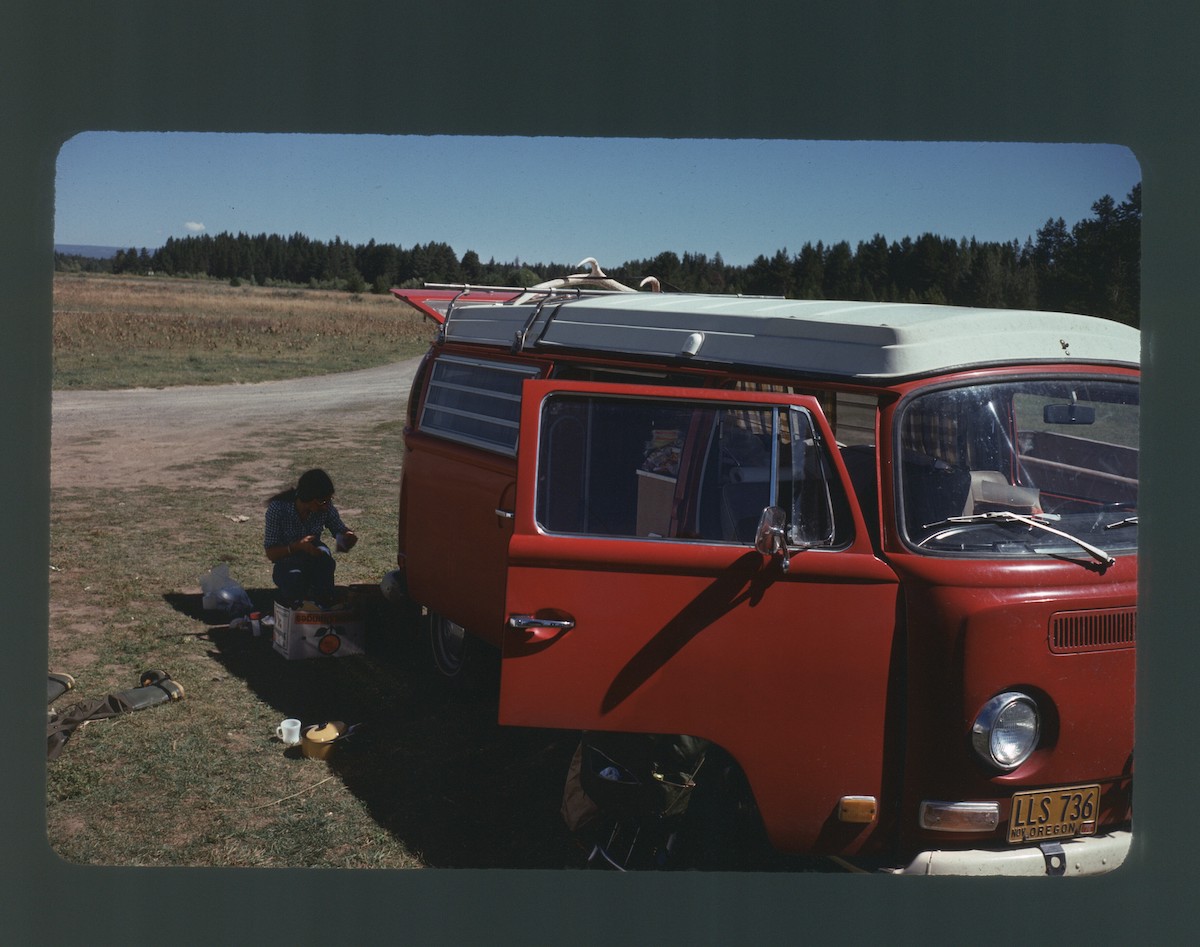 Stay tuned til next month as we dive into the 1970's and the beginning of Umpqua Feather Merchants!